Parish Church of the Assumption of the Virgin Mary

The church is the oldest building in Dolní Počernice - it has been built around 800 years ago.

It started in the medieval ages ...

The church is the oldest building in Dolní Počernice - it has been built around 800 years ago. Around 1200, the then owner of the settlement above the river ford of Rokytka decided to build a private stone church near his wooden estate. However, it cannot be ruled out that this stone church could have replaced older wooden church built at the same place. It is unique that this original stone church survived almost entirely in two thirds of the ground plan of current building to this day. The original church had a rectangular apse with a main rectangular nave. The vault above the apse used to be similar to the current vault. The ceiling in the nave was perhaps made with wood beams or perhaps the nave was directly open to a truss.

An inseparable part of the private Romanesque church used to be the western balcony, to which the landlord and his family entered, usually on a wooden footbridge directly from the adjacent estate. While the interior of the church was plastered, painted white and perhaps decorated with paintings, there were numerous gray sandstone blocks built into its outside walls. We no longer know when exactly was the church built. The ancient dedication to the Virgin Mary as well as its simple layout could bear witness to the second half of the twelfth century. It can not be ruled out, however, that it was built a little later with the participation of the building contractors who were carrying out works between 1226 and 1236 for the Prague bishop John II on the church of St. Bartholomew in a nearby village of Kyje.

The original church presumably survived into the fourteenth century, when the neighboring feudal residence was rebuilt into a stone fortress of the high Middle Ages. The nave was then extended to its present ground plan. The reason for doing this was probably an increasing number of settlers and servants. The church was then probably already completely painted white and the new Gothic balcony replaced the Romanesque one.

In 2004, Romanesque murals from the first half of the 13th century were discovered in the presbytery. The paintings were restored by Miroslav Koželuh in 2010 - 2014.

(text and photo taken from https://cs.wikipedia.org) 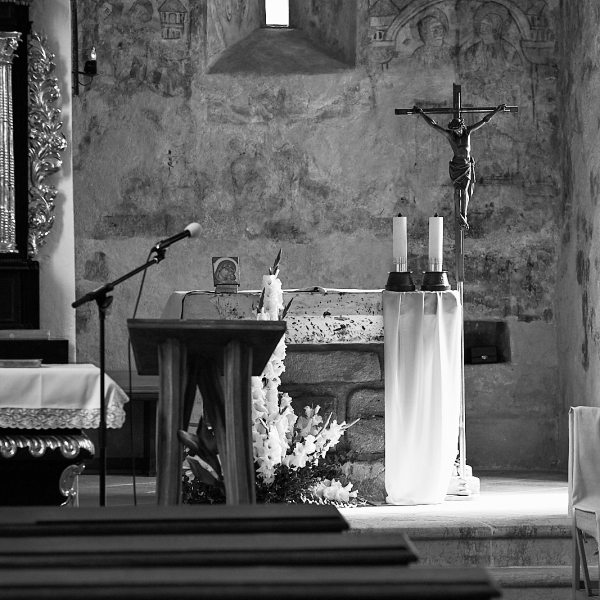 Late Gothic, after the Hussite wars, brought another great transformation of the church when today's dominance of the village - a massive stone tower, was erected at its northern side. The reconstruction of neighboring fortresses saw the destruction of its older tower. So the new church tower took the function of refuge for the landlord of the village in times of danger and conflict. The renaissance vaulting of the church nave with three crosses and with distinctive "ridges" on the edges can be attributed to Matěj Hůlka, who owned Počernice from 1562.

The existence of the Early Baroque side altars is connected perhaps with the repairs of the church at the end of the seventeenth century. In 1734 a large bell of 290 pounds (about 150 kg) from the bell founder Zacharias Ditrich from Prague was placed in the tower. It costed 180 gold coins (guldens). In 1743, today's main altar was purchased, which costed 275 guldens. In 1794, when Classicism followed after Baroque, the church tower was raised by today's last brick floor and was fitted with a new helmet with a lantern. About the same time the tower clock was fitted. The new church organs were installed on a former western manor balcony in 1848. When Mrs. Elisabeth von Dercsenyi bought the estate and Dolní Počernice in 1855, she immediately started renovating and repairing castle and farm buildings, and in 1861 the repairs were also carried out on the church.

The renovation of the church was carried out in 1865 by the architect Hofmann of Vysočany and costed 8000 guldens. The present form is mostly a work of the Neo-Romanesque adaptation from 1886-87. The altar is Baroque, with embedded modern paintings. Some modifications to the interior of the church were made in 1904, such as newly painted walls. Investigations were also carried out inspecting the inner walls for any old frescoes. A grill in front of the altar that was too high was replaced by a lower wooden one with cones. A hole for a death knell rope (that was before pulled outside the entrance to the church) was broken through the vault of the sacristy below the tower.

The floor in the church was repaired in 1911. The cross on the tower was newly decorated with double layer gold and the roof was covered with a new slate. The last renovation of the church was once again somewhat clumsy and damaged some historical details. These days, however, we are cherishing and appreciating this oldest and most valuable architecture in our village with its new festive lighting. 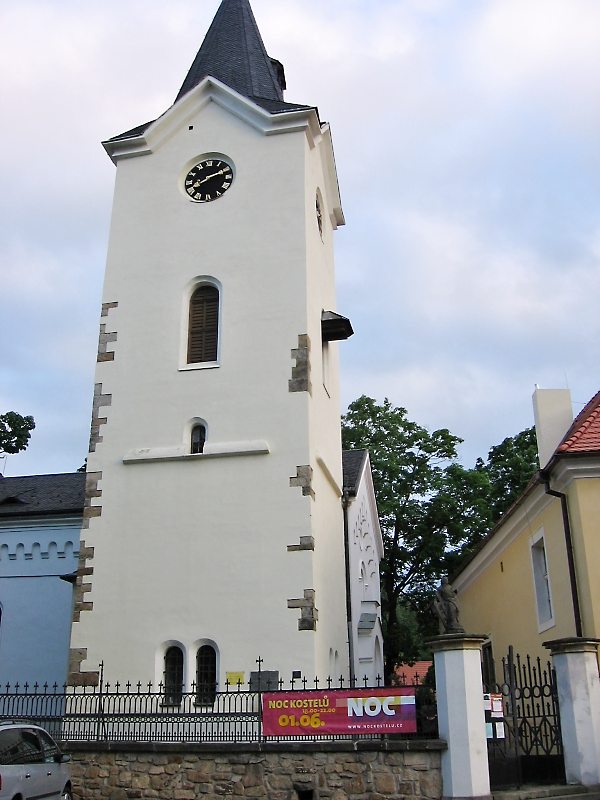 Where you can find the church?

The cgurch lies to the east of the Dolní Počernice chateau, more precisely next to the Children's Home, which is located in the chateau.

Some interior and exterior photos of our church...